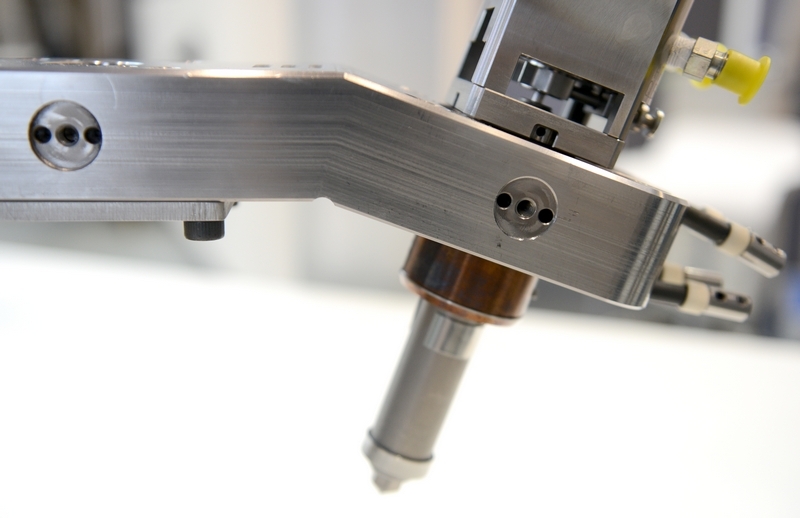 Mould electrification is center stage for Husky Injection Molding Systems at Fakuma 2015 in Friedrichshafen, and the Bolton, Ontario-based company also is showcasing its latest hot runner and controller technologies for the automotive and medical markets.

Craig Reynolds, director of business development for hot runners and controllers, said Husky is seeing injection moulders move away from hydraulics and pneumatics in tooling and toward servomotors.

“It’s growing very, very fast,” even since last year’s Fakuma, Reynolds said, although he said some molders are still “gun-shy” about the new technology.

Some of the advantages of electrification include fewer hydraulic oil leaks, the systems take less space on the manufacturing floor and they are more robust. Plus, the systems can be integrated with the press for better melt-stream control.

“Control is the big advantage,” Reynolds said, especially for the molder. But for the mold maker, a side benefit is speed. As an example, he said a tool for a medical part that may have taken a week to adjust can now be up and running in half a day.

The control system is completely reusable too, “just like they can use a temperature controller today,” Reynolds said.

Husky’s booth will highlight the capability to control both the mould with Altanium Servo Control and part quality with its Ultra Helix valve gate nozzles.

Specific technologies on display at Fakuma include an Altanium servo control with three linear and one rotary servo axis, as well as heat control using new integrated H-series control cards. To highlight the advantages of valve stem motion control, Husky is showing the UltraSync-E hot runner.

For the automotive market, Husky is introducing the Lucent manifold line for automotive lenses and lighting, Reynolds said.

On the injection moulding machinery side, Husky made a high-profile move away from making large-tonnage presses for the automotive market back during the Great Recession in 2009. But the automotive market remains very important for the tooling and hot runner side of Husky, and lately the company has benefited from a strong market. As automakers accelerate efforts to make cars lighter in order to meet ambitious fuel economy regulations, that means replacing metal with plastic.

“In hot runners, we never walked away from that business,” Reynolds said.

Reynolds said Husky is seeing increased automotive work because carmakers have shifted to regionalising their models for local consumer tastes. So where once a carmaker may once have ordered one set of tools for a plastic part or system, now they order four sets.

Another strong market for Husky this year is medical. Reynolds said medical sector business at Husky is up 30% compared with 2014.

The big featured product for Husky in medical is its Ultra Helix valve gate technology. New at Fakuma: nozzles that provide the ability to direct-gate parts while still achieving a gate quality that looks as clean as an ejector pin mark.

“This is a game-changer for the kind of direct gating that [molders] are able to do,” Reynolds said.

Husky is expanding the nozzles available for Ultra Helix, offering a larger 750 series and a smaller 350 series.

“Medical moulders are the ones on the cutting edge; they’re the most demanding customers so they set the pace when it comes to new technology,” Reynolds said. But he noted that the company is seeing interest from other sectors, too.

“We’ve sold it into some surprising markets,” he said.

Reynolds added that Fakuma is a key international trade show for the tooling sector, and it is “certainly a very important channel” for the Canada-based company to introduce new products and technology.

“It’s the place to be if you want to be talking to mould makers,” Reynolds said. “Fakuma has always been known as probably the preeminent show for mould makers, globally.”