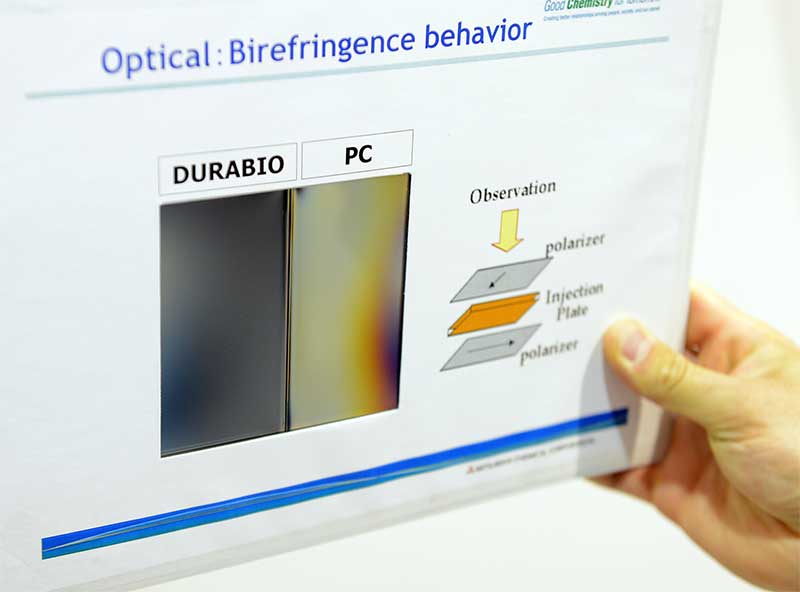 Friedrichshafen, Germany — Mitsubishi Chemical Performance Polymers made headlines this summer with the world’s first plant-based plastic capable of replacing the mineral glass screen in smartphones, but the push of the material into Europe remains a work in progress.

The Tokyo-based firm used the Fakuma show to unveil a new marketing agreement with Germany’s Grässlin Kunststoffe for its Durabio material, made from plant-based isosorbide as a replacement for the controversial chemical bisphenol A.

MCPP’s Japanese headquarters announced in July that Durabio would be used on the new Sharp Aquos 2 smartphone screens, and there are applications underway in Asia in cars, optical displays and glass substitution.

While applications in Europe are in the pipeline, it’s not as far along as in Asia. European-based officials with Mitsubishi were not yet ready to announce applications there.

“The potential is obvious, everywhere you see polycarbonate or PMMA with optical requirements,” said Martin Parlings, manager of business development for Europe during an interview at Fakuma 2015 in Friedirchshafen. “For sure the potential is there. The main challenge is to find the acceptance of the customer in properties, and in respect to price for sure.”

Ralph Meier, MCPP marketing and sales director for Europe, said “we are pretty close to starting” applications in Europe, with customers generally evaluating it on performance rather than any potential environmental concerns.

MCPP said the chemical combines PMMA and polycarbonate in its performance properties, but not necessarily in its chemistry.

Parlings described the marketing of Durabio as saying “it has good product performance, and by the way it is bio.”

The company initially began developing the material looking for a better-performing alternative to polycarbonate for compact discs and other optical media.

At the fair, MCPP executives also said they saw potential in Europe for the company’s new grades of bioplastic polybutylene succinate, with increasing government concern about waste.

They said they saw opportunities for marketing the material in plastic bags, disposable cutlery and film for composting and as replacements for PE liners on paper cups.

The PE liners of paper cups can interfere with recycling systems, but the biobased PBS does not cause problems, Meier said.

Mitsubishi Chemical Corp. currently is building a 20,000-tons-per-year biobased PBS factory in Thailand, in a joint venture with Thailand’s PTT Chemical. It is the world’s first commercial scale facility for biobased PBS, and is expected to come onstream this year, MCPP said.