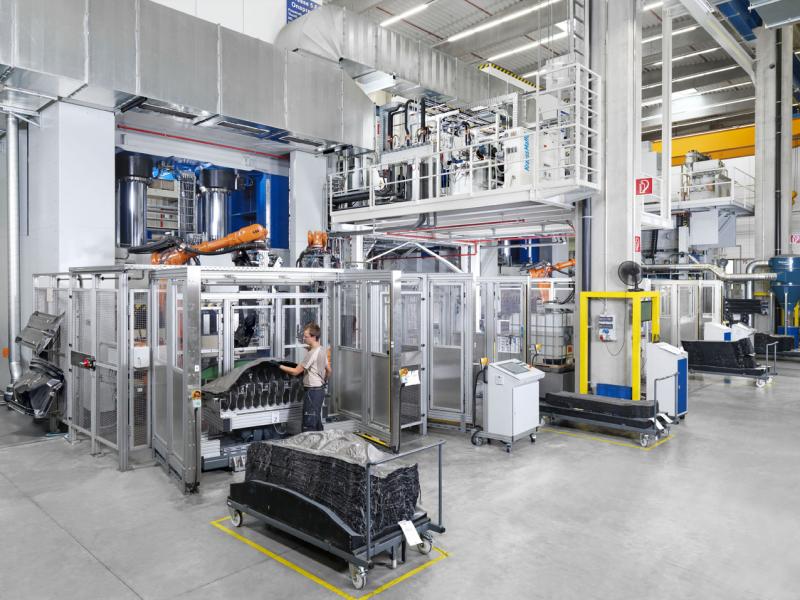 (Munich, November 11, 2015) Producing CFRP components in large-scale series is a standard made possible thanks to the market launch of electric cars such as the BMW i3 as well as many other factors. The HP-RTM process (high-pressure resin transfer molding) from KraussMaffei supports processors on their path towards increased automation and short cycle times. The automotive supplier Fritzmeier also places its trust in KraussMaffei.

At its Bruckmühl location in Bavaria, the Fritzmeier Composite GmbH & Co. KG, develops and produces a wide variety of top-class components for the automotive industry based on fiber-reinforced composites. The list of well-known references includes large automakers such as BMW (particularly the BMW i3 as well as Mini), Mercedes Benz and Rolls Royce. In 2014, the company invested in another HP-RTM machine from KraussMaffei and produced, among other creations, carbon-fiber-reinforced components for the bodywork of the BMW i3. “Very short cycle times were a requirement for the design of the new HP-RTM machine. KraussMaffei produced a system solution perfectly designed for our requirements,” explains Stephan Fraunhofer, Head of Development at Fritzmeier.

The result is a customized HP RimStar Compact in the design of a 4-strand machine with four mixing heads. Two presses can be operated at a time using this machine. By using switchover units, two presses with dual cavities can be operated using a single 4-component machine. This avoids the need to invest in an additional metering system.

An additional challenge was the matrix material in use, which is a highly reactive and particularly corrosive epoxy system. The special distinguishing characteristics start at the selection of the axial piston pumps, which move the material to the mixing and metering systems. Fritzmeier benefited from the in-house pump manufacturing of KraussMaffei in this area. “By manufacturing our own pumps, we able to adapt them directly to the customer’s requirements so that the machine can operate with a higher level of efficiency,” explains Erich Fries, Head of the Composites and Surfaces BU at KraussMaffei. As the only provider on the market, KraussMaffei has been producing the pumps in-house since 2010, allowing for a quick, individualized response to the needs of a customer.

The RimStar series mixing and metering systems from KraussMaffei are also optimally designed for processing of fast-reacting epoxy systems. The specific defining features are the flexibility and high product quality with low scrap rates. “High-pressure injection using the RimStar series enables the processing of fast-reacting resin systems. This makes it possible to quickly fill the mold for fiber-reinforced components to the benefit of shorter cycle times,” explains Fries.

The RimStar Compact 8/4-8/4 HP-RTM at Fritzmeier is equipped with four MK 10 2C RTM mixing heads. This allows for perfect premixing of resin and hardener and works according to the self-cleaning principle. Release-agent metering at the mixing head, including the corresponding release agent station, complete the efficient mixing head system. Systems with demanding processing temperature requirements can be metered to perfection with RimStar high pressure RTM metering machines. High-pressure engineering ensures that the components are thoroughly mixed in the mixing head.

Many years of experience and expertise are paying off

In designing the right HP-RTM system, Fritzmeier profited from both the technical advantages of the RimStar systems as well as the KraussMaffei’s many years of the experience and expertise. KraussMaffei is the worldwide leader with more than 65 HP-RTM machines on the market. “We appreciate the many years of experience and highly skilled consultation services that KraussMaffei provided throughout the entire project phase. As a result of the efforts, we have received a customized system solution that provides us a clear competitive edge,” says Florian Kirschner, Head of Production at Fritzmeier, in praise of the close collaboration.