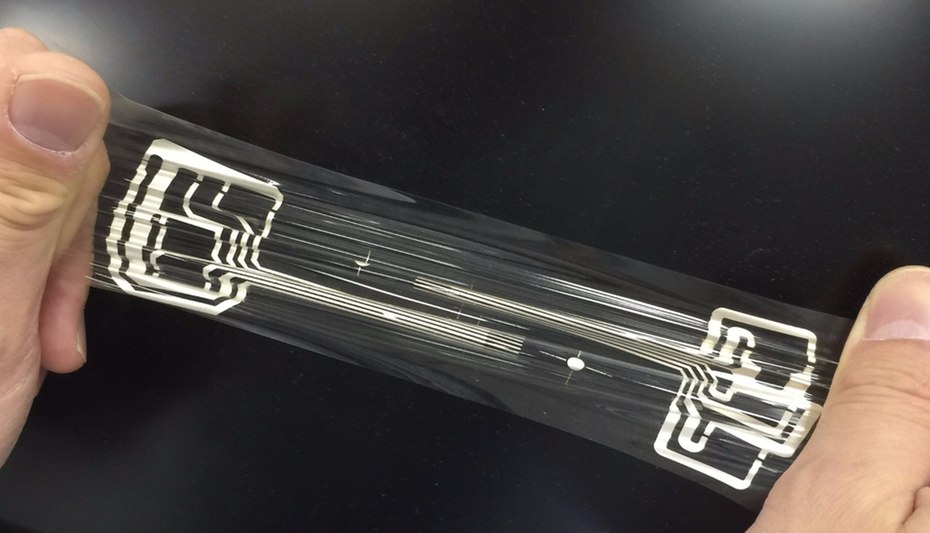 Before flexible electronic devices can become commonplace, there needs to be a practical way of manufacturing reliable stretchable circuitry. While some solutions are already in development, Panasonic recently announced one of its own – a soft, flexible polymer resin film combined with transparent electrodes and a conductive paste.

The substrate can be stretched up to 2.5 times its relaxed length before springing back to its original state, and is made from a proprietary thermosetting resin. This means that although it’s initially cured using heat, subsequent exposure to heat won’t cause it to melt.

Its ability to withstand the stresses associated with repeated stretching and relaxing is due mainly to its three-dimensional cross-linked structure, which distributes mechanical stress evenly across a large area. By contrast, some other more conventional rubbers tend to degrade after being stretched multiple times.

Linking those electrodes are circuits made from the paste. It’s composed of the same resin as the substrate, mixed with silver. Like the electrodes, it remains intact and is still able to conduct electricity while stretching along with everything else.

“The newly developed material is deployable in a broad range of applications, from wearable devices to sensors, displays, and robots,” the company stated earlier this week.