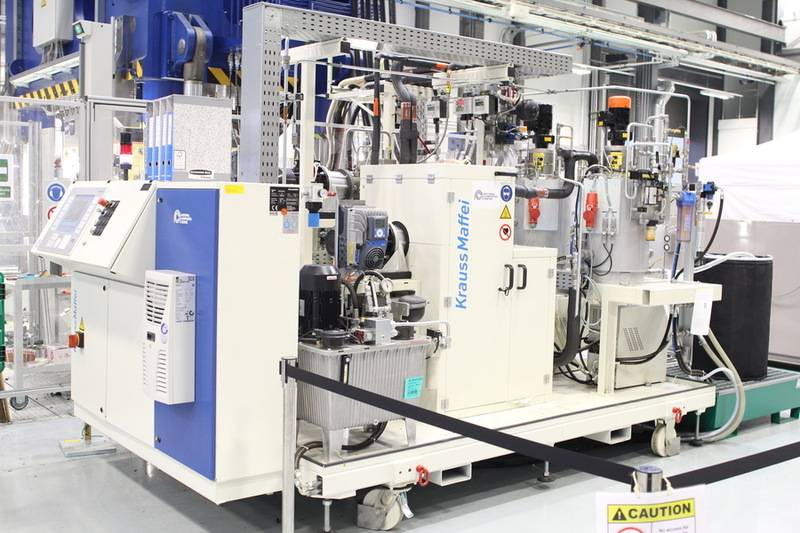 (Munich, January 19, 2016) The National Composites Centre (NCC) in Bristol, UK has put a new KraussMaffei RimStar Compact 4/4/4 into operation. The mixing and metering machine can process both epoxy resin and polyurethane (PUR) and enables short cycle times for production of lightweight components.

“Previously, the HP-RTM process primarily used epoxy resin as the matrix material. Recently, however, an increasing number of components are being made of polyurethane in the HP-RTM (high pressure RTM) process. Because the RimStar Compact 4/4/4 can process both matrix systems, it gives the NCC and its member companies great flexibility for carrying out application-oriented test series.”

In the opinion of the NCC, a critical argument in favor of HP-RTM technology was the fact that KraussMaffei’s experts already have extensive experience in implementing the process in series production. This served as the basis for the highly skilled advice provided to the institute with regard with regard to the design and application options of the metering machine.

The National Composites Centre opened in 2011 and is a central element of the UK Composites Strategy, an initiative of the UK government to promote the composites industry in the United Kingdom. Implementing innovative technologies is intended to make the UK-based companies more competitive on an international level. Particular focus is on the aviation and aerospace, vehicle manufacturing and renewable energy industries. “The composites market is experiencing pronounced growth in the UK. In vehicle manufacturing, the big OEMs are advancing lightweight construction development and the use of CFRP in structural components. The aviation industry is also very active,” adds Stephen Lambert, Reaction Process Technology Business Manager at KraussMaffei Group UK.