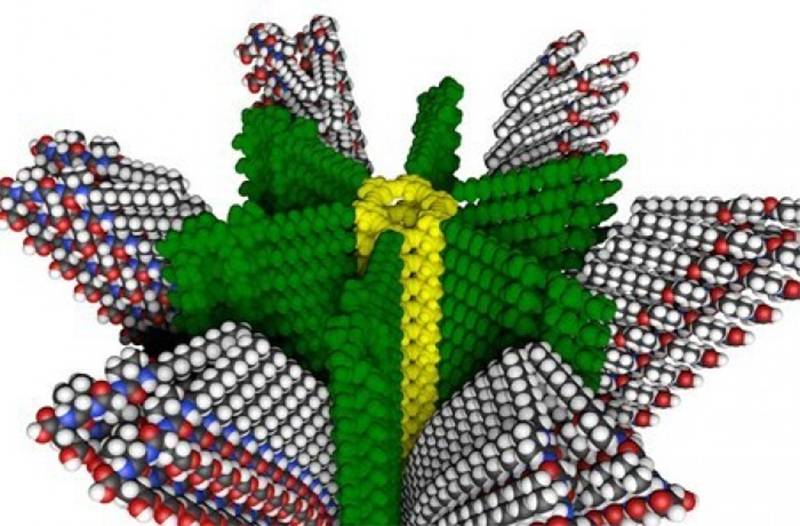 We live in an age of plastics, but even after a century of progress, most polymers still come in a single, homogenous form with basic properties. Now a team of researchers at Northwestern University under the leadership of materials scientist Samuel Stupp have developed a hybrid polymer that combines soft and hard areas like bones and muscles in animals. According to the team, this breakthrough in nanoengineering opens the door to applications ranging from self-repairing materials to artificial muscles.

There are many types of polymers with a bewildering range of properties. These depend on a number of factors, but one of the most important is the polymer’s nanoscale structure. That is, not just the way the units that make up the long chain of molecules stick together, but also the physical architecture these molecules form.

“We have created a surprising new polymer with nano-sized compartments that can be removed and chemically regenerated multiple times,” says Stupp. “Some of the nanoscale compartments contain rigid conventional polymers, but others contain the so-called supramolecular polymers, which can respond rapidly to stimuli, be delivered to the environment and then be easily regenerated again in the same locations. The supramolecular soft compartments could be animated to generate polymers with the functions we see in living things.”

One aspect of the hybridization is how the two polymers interact with one another. The researchers say that the supramolecular polymerization acts like a catalyst on the covalent polymerization, resulting in a polymer with a much higher molecular weight. In addition, the simultaneous polymerizations of covalent and noncovalent bonds causes the two compartments to bond together into a very long cylindrical filament that is completely different from the structure of either polymer alone..

The new hybrid polymer opens new fields of application as the technology matures. The team says it could, for example, be used as a smart-patch drug delivery system with the compartments emptying and refilling as needed. This ability to use up and replace the soft polymer means that is could also be used to create a replenishable energy source or as a basis for self-repairing materials. In addition, the combination of hard and soft polymers could be used to create artificial muscles.

“We can create active or responsive materials not known previously by taking advantage of the compartments with weak non-covalent bonds, which should be highly dynamic like living things. Some forms of these polymers now under development in my laboratory behave like artificial muscles,” says Stupp.