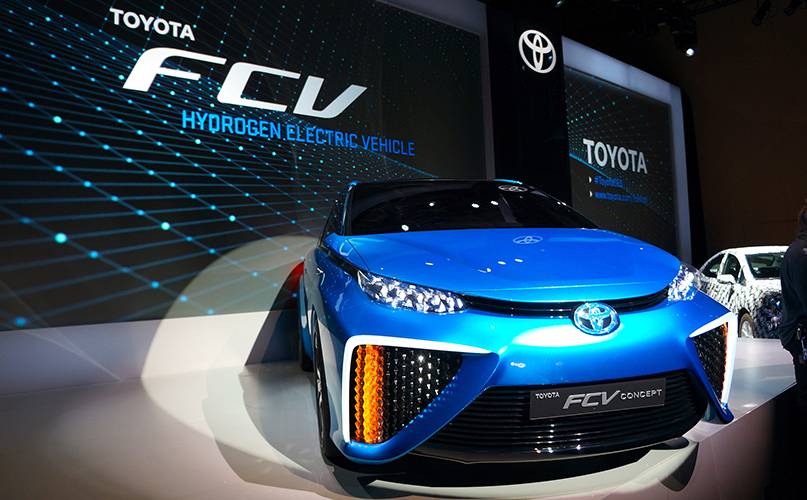 When it comes to hydrogen fuel tanks, high-density polyethylene (HDPE) has met its match. The process used by Toyota to manufacture the tank for its Mirai fuel-cell vehicle (FCV) entails blowmoulding the liner, followed by wrapping with carbon fibre and then impregnating the fibre with epoxy resin that cures at 150 °C. Coupled with the requirement that the tank retain its integrity down to a chilling -70 °C, Ubenylon 1218IU, a polyamide (PA) 6 material from Ube Industries, was selected as the material of choice.

The PA 6 resin reportedly delivers superior performance for hydrogen permeation prevention (an order of magnitude superior to HDPE) and excellent mechanical performance, in terms of durability to withstand sudden changes in tank temperature from filling and discharging hydrogen, and shock resistance in extreme cold.

“Blow-moulding was preferred over injection moulding due to its superior productivity,” says Masayoshi Baba, manager of the Injection and Composite Technology Group (Polyamide) at Ube’s Polymers Development Centre in Ube City, Japan. “The welding step required for injection-moulded tanks becomes irrelevant.” Wall thickness can also reportedly be controlled with high precision in the blow-moulding process. Baba was speaking to PlasticsToday at the recent Chinaplas show in Shanghai.

Prototype tanks for Toyota’s FCV were made of steel, whereas Honda uses aluminium in the tank of its Clarity FCV. The Toyota Mirai uses two fuel tanks. Ube plans to establish a global supply framework for 1218IU to be used as a liner material for high-pressure hydrogen tanks.

South Korea, meanwhile, targets 700 000 FVCs by 2030. The Hyundai Intrado concept car took pride of place at the Lotte Chemical Chinaplas booth. The monocoque chassis of the fuel cell vehicle features extensive use of carbon-fibre-reinforced plastic composites supplied by the Korean firm. Composite tanks located at the rear of the vehicle, meanwhile, store more than 100 litres of hydrogen pressurised to 700 bar.