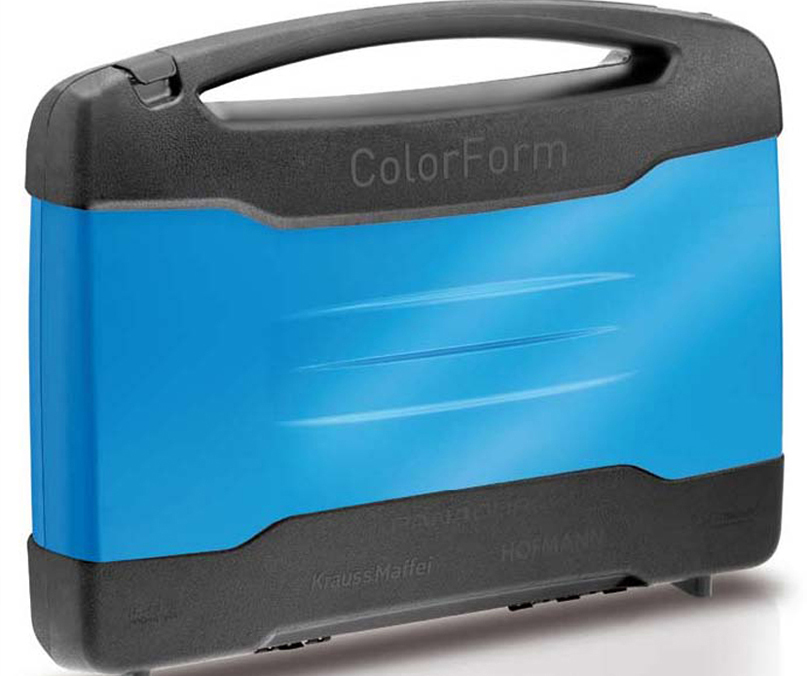 The ColorForm process developed by KraussMaffei has passed the series production tests with flying colours. Since June 2016, Swiss company Weidplas GmbH has been producing the ready-to-install A-pillar panelling for the new Peugeot 3008 SUV at its factory in Rüti, Switzerland. The high-gloss, black lacquered surfaces are produced right in the injection mould and the components are assembled and made ready for installation in the downstream automation process.

“By developing the ColorForm process, KraussMaffei revolutionized the manufacturing of components featuring a high-gloss finish. It makes us all the prouder that our customer, Weidplas, has now incorporated the process into a series application for a large OEM,” explains Dr. Hans Ulrich Golz, Managing Director of KraussMaffei and President of the Injection Moulding Machinery segment of the KraussMaffei Group.

The ColorForm technology combines injection moulding and reaction process machinery and enables fully automated manufacturing in a one-step production cycle. First, a thermoplastic base body forms in a mould, which is then flow-coated directly in a second cavity using a two-component polyurea (PUA) or polyurethane (PUR) paint. The result is a finished component with the desired lacquered colour assignment and a premium-quality surface, produced within one minute.

For the ColorForm production cells currently installed in the Rüti factory, the customer opted for the swivel plate technology that has been implemented in a SpinForm GXW 650 – 1400/2000 injection moulding machine with a clamping force of 6,500 kN. The cover with the ColorForm surface and the seal carrier lying underneath are injected simultaneously. The second injection unit of the injection moulding machine is used to apply a TPE sealing element to this carrier. This produces one set per cycle with a left and right A pillar panelling.

KraussMaffei also acted as the system provider of the completely automated cell where an IR 1500 six-axis robot from Kuka takes over the complex handling of the components. This includes aspects such as component demoulding, sprue cutting as well as placement on and removal from the cooling station and rotary table. Handling during ultrasonic welding of the upper and lower parts presents a particular challenge. After an extended cooling time, the covers are initially placed into an ultrasonic welding system made by KLN. Here, they are cut, mounted onto seal carriers and welded in the follow-up process. Thanks to the fully automated process, consistently high quality of the finished components is guaranteed.

“The fact that we have come so far with the ColorForm technology can certainly also be attributed to KraussMaffei’s ability to supply the three technologies that are critical to this process: injection moulding technology, reaction process machinery and automation. All from a single source. The system expertise and the outstanding collaboration of the teams have consistently led to success,” says Nicolas Beyl, Managing Director of KraussMaffei and President of the Reaction Process

Using the one-step ColorForm process, the process costs can be reduced considerably compared to classic injection molding plus painting. The costs for a separate painting system are eliminated. The scrap rates are also reduced for multiple process steps. Firstly during painting, secondly due to the single-stage process and thirdly due to the particularly robust surface finish of the components.

In addition to the economic advantages, the added value of the ColorForm process lies primarily in the high design freedom of the components. Clear varnish, piano black, depth effects, logotypes or frosting, even metallic effects are possible.

Other functional integrations or multi-colour finishes are likewise no problem at all. The process works without any release agent whatsoever. The excellent bonding of the PU/PUA paint with the thermoplastic part creates an especially robust manufactured part. It is resistant to UV radiation and features high scratch resistance.