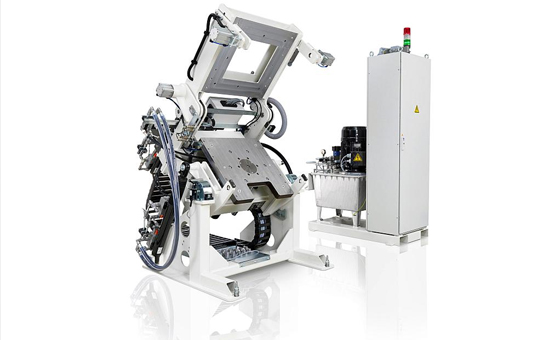 The new steering wheel mould carrier for KraussMaffei Reaction Process Machinery features high flexibility, excellent ergonomics and maximum machine availability. These features are a result of the new ergonomic design and expanded swivel range of up to 90 degrees. The new mould carrier is used in polyurethane encapsulation of steering wheels.

The mould carrier provides high flexibility plus good operability since the clamp has a tilting option that is continuously and individually adjustable. The swivel range – expanded with the new mould carrier – is between zero and 90 degrees, both for foaming and for reaction process machinery. The 90-degree foam position enables the mould to vent air through the separating half.

“This means that no additional degassing openings are required. Less waste is produced and the material usage is reduced,” explains Wolfgang Frehsdorf, Head of the Foam business unit at KraussMaffei. The machine operator also benefits from the option of tilting because the handling position is freely adjustable in a range from zero to 40 degrees.

The new mould carrier for steering wheel encapsulation is easy to scale according to capacity requirements. The modular design provides for this. Each station has its own hydraulic unit and its own proportional controller. Thus the user can arrange multiple units of this kind side-by-side at will and have them run in both individual as well as synchronous cycles, which are programmed using the touch panel.

Thanks to this independent control of multiple mould carriers, the system achieves the greatest machine availability. In addition, the greatest flexibility in factory planning is provided by the option of simply shifting each mould carrier from one system to the next. The mould carriers can be quickly installed on site, and the expansion of existing systems is possible without any significant production interruptions.

The steering wheel mould carrier can handle both hydraulic and pneumatic mould functions. The clamping forces of the mould are freely adjustable, reach up to ten tonnes and are variable throughout the mould carrier cycle. The customer can personally and conveniently program this cycle using the control system’s touch panel.

The clamping unit is secured to the joining plates in order to build up force. The strength-optimized frame structure of the mould carriers, in combination with a hydraulic locking device, ensures an optimal force flow when closing the mould halves. The minimal warpage of the mould fixing platens even allows non-inherently rigid moulds to be used. The FTR mould carriers not only provide access to the mould from three sides, but also allow foam to be discharged into the open mould and moulds to be changed quickly.