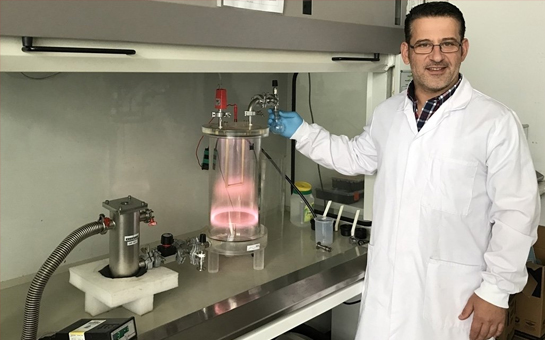 Australian scientists have developed a polymer coating that can test for bladder cancer more simply and much cheaper than current invasive techniques.

Professor Krasi Vasilev, from the University of South Australia’s Future Industries Institute, told Plastics News his team was researching antibiotic properties of polyoxazoline-based polymers and discovered a polymeric compound that will bind to cancer-specific antibodies in urine.

That enabled the researchers to develop a portable, non-invasive devise to test for bladder cancer. Vasilev said bladder cancer is difficult to diagnose and the probability of recurrence is high — about 75 percent within five years.

Survivors have regular cytoscopies, which involve inserting a thin tube with a camera attached through the urethra to the bladder.

“It’s a very invasive procedure and expensive,” Vasilev said. “It requires hospitalization and can lead to complications.”

The new test exposes a urine sample to a 20-nanometer-thick polymer coating on a substrate. The compound binds to antibodies when it recognizes a protein on the surface of cancer cell membranes. The device uses biosensors and micro-optics to identify the presence of those cells.

The research is led by Adelaide, South Australian-based SMR Technologies, a unit of SMR Automotive Australia Pty. Ltd. which originally manufactured parts for Australia’s auto industry, but has expanded into other fields with the demise of the Australian industry. Other SMR researchers have developed plastic auto wing mirrors that are exported to the United States.

SMR has invested A$2.5 million (US$1.9 million) into a three-year project to trial the cancer-detecting device with 1,000 people, including 200 who are bladder cancer survivors. The Federal Government has matched that commitment and Vasilev said there is another A$5 million (US$3.8 million) in kind from organizations like his university, through salaries for him and other scientists involved. The trial will start in six months once the prototype device is ready.

Vasilev said the polyoxazoline-based polymer technology, which has been patented, has potential for other medical uses. Its antibacterial properties may be useful for implantable devices. Valisev said almost half of hospital-based infections occur after medical devices, like artificial knees and hips, are implanted.

Infections caused by bacterial colonization of medical devices are a substantial problem for patients and the health-care industry but the polyoxazoline coatings are a potential solution.

Vasilev is also researching ways to use them in antifouling applications for ships. He said “undesirable biological adhesion” also has detrimental effects in food processing and a wide range of other industries.

Using plasma polymerization to form nanoscale coatings on a solid substrate means no prior substrate preparation is required and eliminates use of organic solvents “so it’s a greener technology,” Vasilev said.