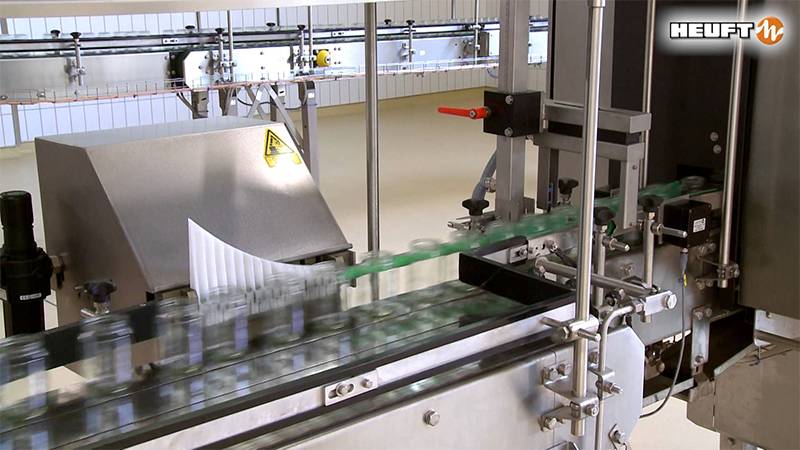 No one likes mould in their drink.  Scraps of transparent film can also really spoil your thirst.  Such faults frequently result in product recalls and costly liability cases for producers.  Inspection systems from HEUFT effectively prevent this.  The specific examination of full containers even makes the invisible visible.

Mould can often hardly be seen with the naked eye.  Empty bottle inspectors such as the HEUFT InLine already have a distinct advantage in this respect.  They identify the toxic spores with a high degree of reliability and remove contaminated bottles before the filling process.

The final inspection of full containers goes one step further with regard to detection accuracy.  Because the detection conditions are more favourable in filled drinks bottles:  mould changes colour as soon as it comes into contact with liquid – a speck which is initially bright turns black.  In this way it shows a higher contrast than when dry and can be clearly identified in the camera pictures.

Minimising the residual risk – with the HEUFT sinker

Anyone wishing to minimise the residual risk of mould contamination cannot afford to ignore the HEUFT technologies for an optical inspection of filled drinks bottles.  The HEUFT sinker module identifies such low density foreign matter on the base of the container using specially adapted lighting units, mirrors and camera angles with a high level of precision – even when this is extremely small and inconspicuous.

Faults covered by glass marks or embossing cannot escape the optical examination either.  The specially developed evaluation procedures of the HEUFT reflexx² real-time image processing system ensure this.  The software even compensates thickness variations in the base surface precisely.  Therefore practically nothing can be overlooked.

Detecting more – with the HEUFT floater

This also applies to other low density contamination such as transparent film.  The special dark field technology from HEUFT tracks this down reliably.  The full container inspection also provides more favourable detection conditions for this than those for empties.  Because small pieces of film quite often become stuck to the insides of empty bottles.  As a result they are hardly noticeable.  This generally changes after the filling process.  The film floats around in the product and can be seen more easily.  Thus the HEUFT floater module identifies them reliably.

A full bottle inspector such as the HEUFT spotter SF equipped with a HEUFTsinker and a HEUFT floater can therefore also find what was possibly overlooked before:  a useful redundancy for double protection!  And it can even be expanded again significantly – with the exclusive pulsed X-ray technology available exclusively from HEUFT!  It identifies transparent glass splinters, metal fragments and other high density foreign objects, which can enter the bottle before it has been safely sealed, with unequalled low radiation.

HEUFT sinker, HEUFT floater and X-ray strobes:  the HEUFT eXaminer IIXOS combines all three detection technologies in an end of line system for an extensive full container inspection.  The clear advantage in terms of automation, computing power and precision when tracking containers together with the audiovisual HEUFT NaVi user guidance make the operation of the foreign object detection of the new generation easy, safe and resource efficient.