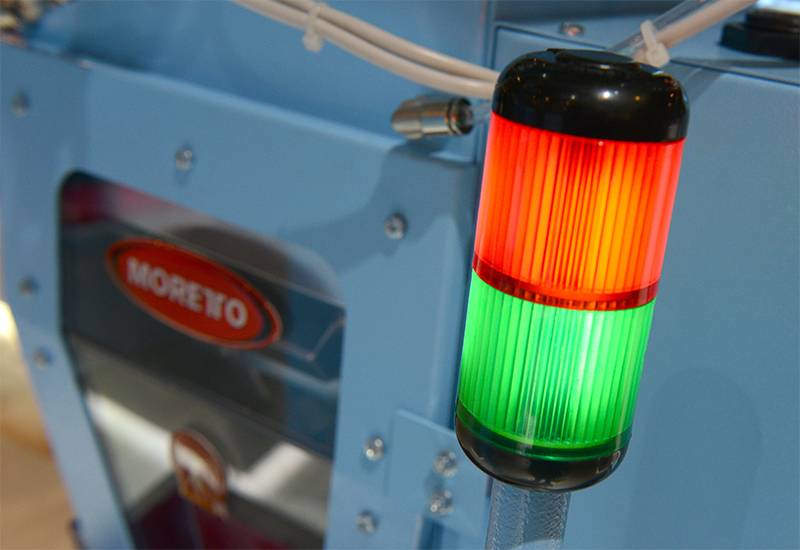 Moretto, the Italian manufacturer of auxiliary equipment that now runs a 15,000-square-foot US facility in Columbus, introduced at the Fakuma show in Germany the final piece of its Eureka project to dramatically improve drying.

At Fakuma, Moretto rolled out the Moisture Metre, which measures the moisture inside resin pellets in real time — allowing the certification that the plastic is properly dried, according to Paolo Gasparotto, head of sales for the United States and Canada.

That certification is important for the medical and automotive markets, Gasparotto said during Moretto’s 15 Oct news conference at Fakuma.

Gasparotto said drying equipment is the largest segment for Moretto, accounting for 45% of sales. Conveying is 25%, dosing is 14% and cooling and grinding equipment generated 8% and 6%, respectively.

“The car industry is the one that demands this system most,” Moretto said. Medical and PET packaging also need to prove out the level of drying, he added.

Materials that absorb water — known as hydroscopic resins — can cause defects on the moulded parts. In PET preforms and bottles, improperly dried resin can “create a disaster problem,” Gasparotto said.

Resin can be dried too much, or not dried enough. Gasparotto said that’s why online monitoring is important. Moisture Meter takes measurements four times every second, and logs the data. It also ties back into the complete drying line, and can make adjustments. “Moisture Meter closes the loop,” he said.

“We need to stay in a very, very tight window, with the moisture content,” he said.

The Eureka system is available to US customers, according to Federico Ruzzon, the regional sales manager who runs the Columbus operation. The full range of Moisture Metres will be available in the United States in 2016, although some Moisture Metres are available now.

The US facility handles sales, service and parts. It has a showroom of Moretto equipment, as well as a large parts warehouse.

Here are the other components of the Eureka drying system:

• The X-Max dryer uses a process blower, a tower of the mineral zeolite and a device for dew point control.

• An OTX drying hopper, which Moretto says is 40% smaller in size than a conventional unit, uses less energy and is 66% more efficient. The OTX has a patented design that revolutions how air flows through the hopper thanks to a special geometry. Air flows in more of a random pattern in conventional dryers, Gasparotto said.

• The Flowmatik airflow management technology “automatically regulates the flowrate of the air” inside the hopper, Ruzzon said in an interview at the Columbus facility. Flowmatik, which displays the information on a user interface, can handle up to 32 hoppers.

Ruzzon said all the X-Max dryer is modular, so you can expand the system as needed.

Moretto is based in Massanzago, Italy, sells auxiliary equipment in 55 countries. The company operates subsidiaries in Germany, Poland, Brazil, and Turkey. The US operation opened last October.

Moretto picked Columbus, not in honor of famed Italian explorer Christopher Columbus, but because the Ohio capital is centrally located, with good highway access to major industrial areas. Just down the street from Moretto is a major CSX intermodal terminal.

“Logistically speaking, it’s in the middle of all major locations,” said Angelo Moretto, Renato’s son, who comes to the US location regularly.

As of mid-October, Moretto employed five people in the Columbus operation.

And Christopher Columbus is a big deal in the city of Columbus, which has a replica of the Santa Maria docked on the Scioto River. And the city has a big Columbus Day Parade each year.