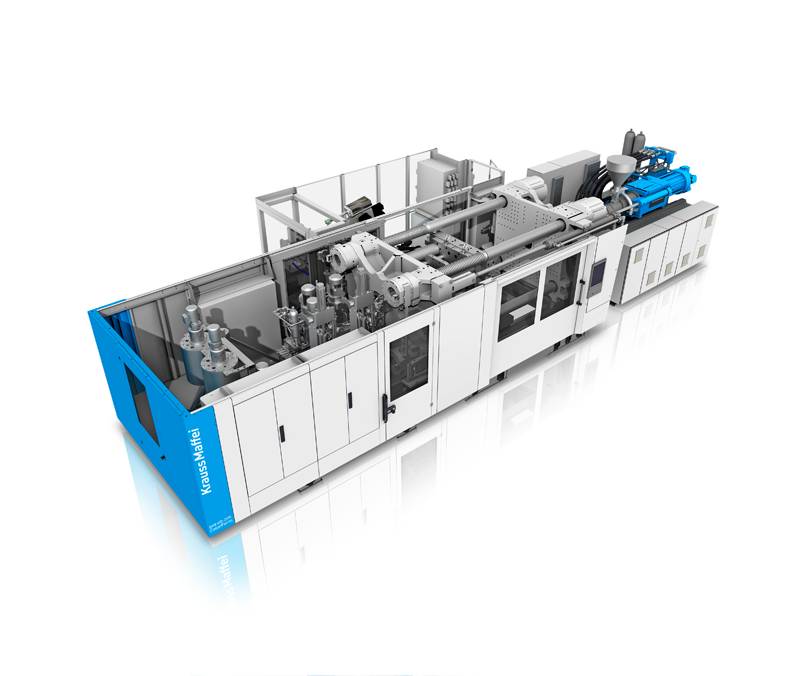 KraussMaffei has revolutionised the manufacturing of components with a high-gloss finish with its ColorForm process. The technology combines injection moulding and reaction process machinery and enables fully automated manufacturing in a one-step production cycle.

Previously, systems have been configured individually and on a project-related basis. Now, with the GXW 650-2000 ColorForm, KraussMaffei will present a new, compact machine at K 2016 in Düsseldorf in which all components for processing the paint finishing system are completely integrated. Especially for new users, this makes the introduction into the one-shot process easier.

“The ColorForm process is used to replace classic lacquering processes, including the up- and downstream working steps for conventional lacquering. This cuts investment costs and boosts logistics efficiency; the scrap rate is lower and parts transport is higher,” explains Dr. Hans Ulrich Golz, President of the Injection Molding Machinery segment of the KraussMaffei Group and Managing Director of KraussMaffei.

During the ColorForm process, a thermoplastic base body forms in a mold, which is then flow-coated directly in the cavity using a two-component polyurea (PUA) or polyurethane (PUR) paint. The result: a finished component with the desired lacquered color capability and premium quality surface.

Significant changes can also be seen on the mixing head for the paint finishing system. It is lighter and approximately 30 percent smaller, making it more compact than before. This eases installation on the mould and handling in general.

As a three-component mixing head, it now makes it possible to change dyes very quickly. Previously, the dye portion of the paint finish was added directly to the system’s A components. Thus, it could be found throughout the entire tank and in the hoses.

This made replacing the dye time-consuming and sometimes led to material being wasted. The new mixing head meters the dye directly during the injection process. “This makes it possible to replace the dye quickly, within five minutes. This preserves resources and supports production efficiency,” adds Nicolas Beyl, President of the Reaction Process Machinery segment at KraussMaffei Group and Managing Director of KraussMaffei.

This flexibility is important primarily for applications in the automotive industry, because end users in this field increasingly demand options for customising their vehicle, making production batches smaller. Along with plain-colored and transparent systems, various paint finish manufacturers have recently begun providing various paint finishes with metallic effects, which can be used to realise modern and sporty surface designs. The use of multi-cavity moulds increases the production volume and the return on investment is achieved more quickly.

“With the new compact ColorForm production units, we provide our customers with a cost-effective solution ready for series production to increase their productivity in the long-term,” summarizss Beyl.