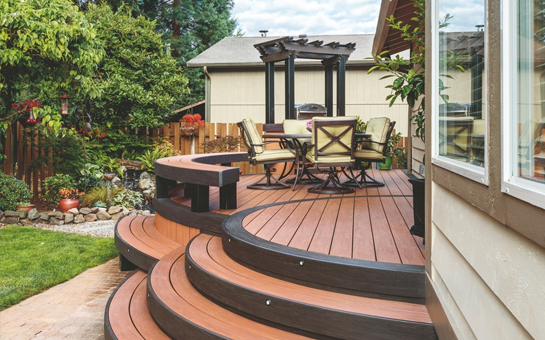 A growing number of contractors are using heating blankets to form PVC and composite decking into unique designs that follow the customers’ lay of their land, kidney-shaped pool or desire for something different.

It’s just not luxury homeowners looking to decorate their decks with curved boards and patterned inlays, according to Patrick Barnds, general manager of decking, railing and accessories for Skokie, Ill.-based Azek Building Products.

“For mid-price point construction, it is achievable,” Barnds said in a telephone interview. “It’s not a purely custom product where you’re spending 100 percent more to get the look you want. These things can be done in the field with relatively available technology for most contractors. If they have the right training and a little experience, they are pretty proficient at getting these forms done on a tight budget.”

Homeowner spending on improvements and repairs might be easing up a little this year, but the outlook for the synthetic decking segment remains strong.

The Harvard Joint Centre for Housing Studies released a report Feb. 28 that says the residential remodelling market — including both owner-occupied and rental properties — which reached an all-time high of $340 billion in 2015, will expand at a more gradual rate than recent years but still show “healthy” growth through 2025. Spending is expected to increase 2 percent annually for the next 8 years after adjusting for inflation. That’s just below the pace of growth posted over the last 20 years.

“With national house prices rising sufficiently to help owners rebuild home equity lost during the downturn, and with both household incomes and existing home sales on the rise, we expect to see continued growth in the home improvement market,” Kermit Baker, director of the remodelling futures program at the Harvard centre, said in a news release.

The repair-and-replace market generates most of the revenue for synthetic decking manufacturers. Only 5 to 10 percent of new-home builders install alternative-wood decking, Barnds said.

“By far, most of the sales go into remodelling and replacing,” he said. “Our best customer is the one who had a wood deck. After people live with one for five or six years they start to see it deteriorate. They say, ‘Gee, I don’t want to do all this maintenance and this looks bad.’”

Even though the overall remodelling market is projected to post gradual growth, synthetic decking manufacturers expect to fare much better.

In addition to wanting decks that hold their beauty longer, homeowners are looking for more organic shapes to complement their landscapes and personalities. “Deck board bending” tops the list of “trends ready to take off this year” for James Russell, a 25-year decking contractor in the state of Washington.

“Curves are becoming increasingly popular in the decking world, contradicting the antiquated idea that all decks must have square corners,” Russell wrote in a February column called “Cutting-edge deck trends for 2017” on building-products.com. “Now that I’ve started doing curves, I don’t think I’ll ever stop.”

He uses heating blankets by Seattle, Wash.-based Heatcon Inc. that are made up of wires encapsulated in silicone rubber with a woven fiberglass outer layer. The heating blankets are 8 inches wide and 10 feet long and come in portable kits with heating controls and sensors.

To create a new shape, a deck board is placed between two heating blankets for 25 minutes to an hour. When the consistency of the board is like a big, hot noodle it can be taken to a forming jig.

“Most PVC-based decking materials will start to become malleable at over 190° F but they really need to get much hotter to easily bend into a smooth shape and to hold that shape as the product cools,” Barnds said. “The correct temperature needed for properly bending decking material to a permanent curve will vary depending on the product type — PVC or wood-polymer composites — specific composition, density, thickness and width of the material, and the radius of the curve. The range for most products is between 220° and 260° F. That is a temperature range that can be effectively achieved on the jobsite with commercial-grade heating blankets capable of reaching and consistently holding those temperatures.”

Alternatively, many contractors use ovens at an off-site location to perform the heating and bending process, Barnds added.

The heated plank then is secured around a jig with clamps into the desired shape until it cools and becomes rigid again. The process is repeated to create interesting effects.

“You can run the deck boards around kidney-shaped and oval pools like concentric circles of a pebble dropped in the water, carrying that visual out,” Barnds said. “Heat-bending technology allows that.”

Installers also are creating curved steps and benches or inlaying patterns, such as Celtic knots, to personalize outdoor living spaces. They are heat bending synthetic trim, too.

Last September, Azek, which changed its name this year from CPG Building Products, posted a demonstration video on its website about forming trim into arches and ellipses with heating blankets. After about 10 minutes, when the trim board had the look and feel of cooked spaghetti, it was ready to be formed into an arch, oval or other shape.

Trex Co. Inc., which is based in Winchester, Va., and makes decks from recycled polyethylene and reclaimed wood, also has online videos about heat bending its products “to raise outdoor living to an art form.” The Winchester, Va.-based company also sells a heating unit called the TrexCustomCurve that includes a forming table for $7,995.

The chance to customize outdoor spaces with curved decking will give some homeowners another reason to switch from wood to synthetic products beyond low maintenance and durability. The overall decking industry has enjoyed continued growth at a rate of 2 to 3 percent annually to about $4.4 billion in 2016. However, the synthetic segment of the market has been growing at a faster clip of 6 to 7 percent annually and has reached about $1.1 billion.

“The market right now feels like it is growing faster than it has the in past couple years,” Barnds said. “We’re starting to see some pretty robust numbers from our competitors and our numbers look good, too.”

Azek Building Products, which produces Azek PVC decking and TimberTech composite decking, has estimated annual sales of $363 million. Along with Fiberon, which is based in New London, N.C., the three deck makers comprise about 86 percent of the synthetic decking market.

Known for years as a brand of CPG Building Products, the Azek name got top billing following market research that shows it has greater recognition and awareness amongst dealers, contractors and consumers. The Azek name also goes beyond decking and is associated with trim.

“Azek trim has been sort of a gold standard of alternative materials for trim products for a number of years, and that’s where a lot of the brand recognition is,” Barnds said.

In addition to decking and trim, the product lines under Azek Building Products includes railing, moulding, porches and pavers as well as the capped composite wood decking and railing under the TimberTech brand.

The Azek siding that debuted at the 2016 International Builders’ Show isn’t listed or shown online — yet.

“It will be soon,” Barnds said. “We’re about to make an announcement about that.”

He also said Azek is working on more realistic wood visuals, different blends of resins and colorants in its capstock material, and performance characteristics for other applications, such as marina docks and decorative cladding.