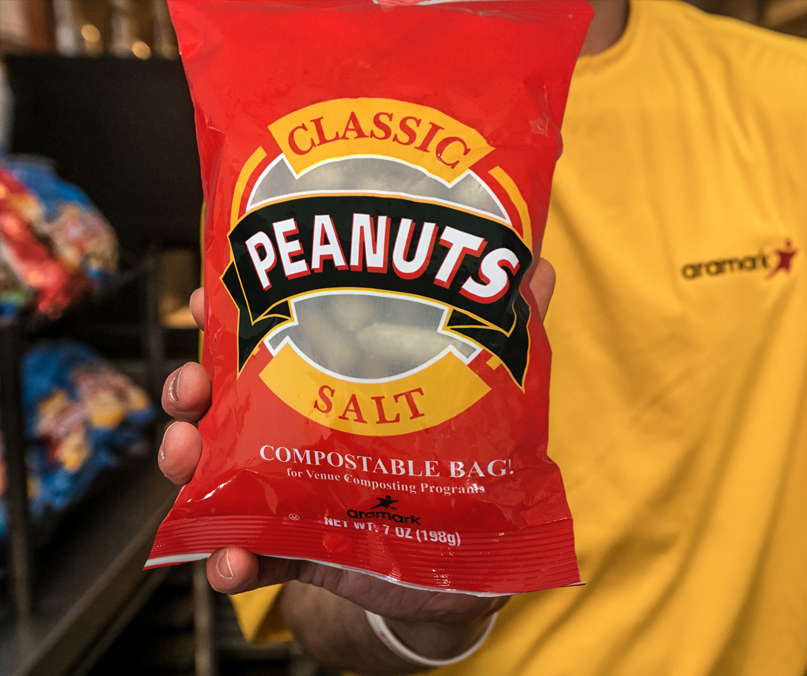 Snack packaging is about to evolve with the introduction of breakthrough compostable peanut bags that address environmental sustainability.

Introduced in November last year, the compostable peanut bag sold throughout general concessions and in-seat vending at Arrowhead Stadium in Kansas, with the goal of expanding to other areas following the pilot phase.

The compostable peanut bag is part of an environmental initiative, ‘Extra Yard for the Environment,’ which is designed to devise and implement new green policies while also raising awareness for sustainability efforts.

Several companies were involved with this project, which took about 18 months to come to fruition, including Aramark, a large snack-vending company.

With peanuts among the best-selling snack foods at sports events, the introduction of this compostable peanut bag is a potential game-changer. It demonstrates to snack producers and users of flexible packaging that composting is a viable waste-reduction strategy.

Still, getting consumers involved in composting is problematic. There is a lot of confusion surrounding the process, as not everything is 100% compostable. Consumers throw biodegradable stuff in with the composting material, not knowing what can and what cannot be composted.

However, compostable packaging can be the innovative driving solution that decreases environmental impact and enhances the game-day experience.

The pre-packed compostable peanut bag made its appearance at the Super Bowl as part of U.S. Bank Stadium’s efforts to recover more than 90% or more than 40 tons of stadium waste at the game in a program they call Rush2Recycle.