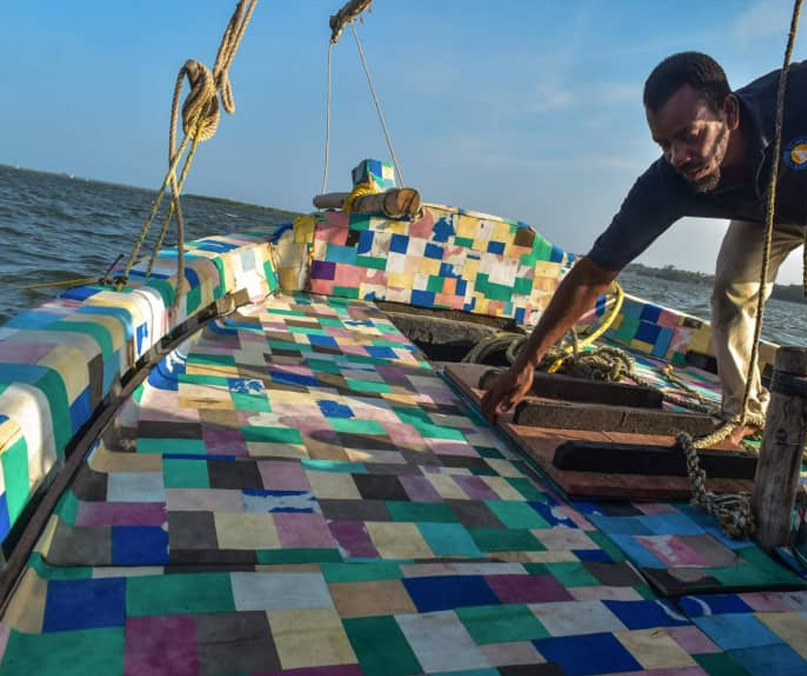 It’s all aboard on the world’s first plastic waste boat!  The Flip Flopi is a traditional dhow sailing boat- but with a difference. This dhow is made entirely from plastic trash collected from Kenya’s beaches and towns, created as part of an awareness campaign to reduce single-use plastics.

The brightly-coloured boat is a 9-metres long and was built on the island of Lamu, using traditional dhow builders and techniques, with the entire boat constructed by hand. The dhow is clad in colourful sheets of recycled flip-flops, and the production team had to pioneer new methods to craft various parts of the boat. Ten tons of discarded plastic was used during the creation process.

The project was founded in June 2016, established to show the potential of “already-used” plastic, and has now partnered with the United Nations Environment’s Clean Seas campaign. Nine African countries have already demonstrated their commitment to this issue by signing the campaign, promising to take action to tackle marine pollution.

The vessel launched its longest voyage in January 2019, travelling a 500-kilometre journey that started from Lamu, Kenya and ended in Zanzibar, Tanzania. The aim of this journey was to raise awareness and share their message along the east African coast. The team targeted lawmakers, companies and communities as part of their campaign to raise awareness about plastic waste, how to reduce plastic use and stop plastic polluting the environment.  The vessel will be on show in Nairobi at the United Nations Environment Assembly, on the 11th to the 15th of March 2019 and will be undertaking a voyage from Lamu, Kenya to Cape town in 2021. The 2021 tour will take between three and four months, travelling for more than 5 000 kilometres.

The boat has been featured by BBC, Al Jazeera, Sky News, Reuters, CNN, Der Spiegel, The East African and more. Kenya recently introduced the world’s strictest laws on single-use plastics, with Kenyans that produce, sell or use plastic bags facing imprisonment of up to 4 years of fines up to $40 000.